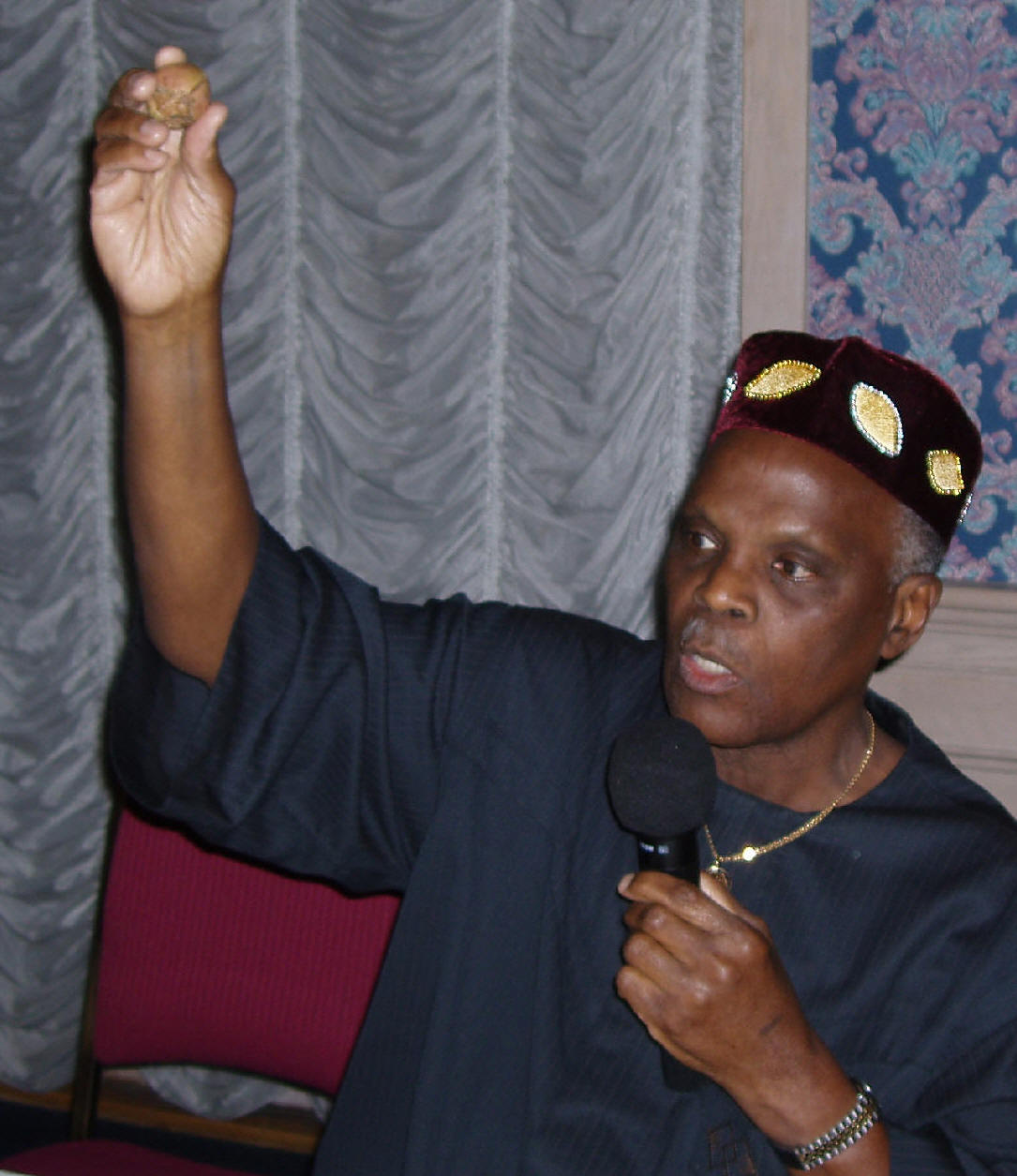 His latest novel is  ‘The Jericho

Wall’ (xlibris 2011; released in 2012). He speaks about   his novels, tips on longevity, his friend Chinua Achebe and the reading habits of Africans. He holds the title of ‘Nnabuenyi Nnewi.’ Interview by Chido Nwangwu, the Founder & Publisher, USAfrica, AchebeBooks.com & CLASSmagazine, Houston.

1. USAfrica/Chido: Congratulations on your latest novel, The Jericho Wall. In your words, give a 150-word, thumbnail summary of the story to the readers of USAfrica and CLASSmagazine.

Momah: This is a story of the Igbo Diaspora in America, and the cultural conflicts that sometimes arise when an Igbo youth and an American fall in love and want to marry. Okocha, elder son of Lolo Ekemma and Chief Nat Anigbo falls in love with Tatiana Karefa, only daughter of Edna and Philip Karefa, a jovial , unapologetic Baptist. But Chief Anigbo is implacably opposed to his son’s plan to marry the American girl, notwithstanding entreaties from Chikezie Odogwu, a well respected Igbo community elder. Okocha, for his part, sees the traditional and cultural underpinnings relating to the institution of marriage among the Igbo as a veritable WALL OF JERICHO that would not let an Igbo youth marry from outside the Igbo clan.

2. USAfrica/Chido: Here at USAfrica, we have observed your prolific capacity and artfulness in telling good stories; what informs your decision to choose and set your novels?

Momah: Most of my stories have a core of actual life experiences of myself or of other persons known to me. The details of the story line in every case, and sometimes the geographic setting, are of course fictionalized.

3. USAfrica/Chido: May I note and ask in the context of the fact you got your first degree in 1953 (History, English and Religious Studies) from the University College Ibadan, you’re a worthy contemporary of some of Africa’s foremost writers, including Prof. Chinua Achebe, Prof. Chukwuemeka Ike, Prof. Wole Soyinka, and several others, how has story-telling changed over the past 50 years in Nigeria and Africa?

Momah: I am not erudite enough to comment on the entire continent of Africa. But I know that Chinua Achebe’s THINGS FALL APART, published in 1958, was epochal, and was the beginning of a new era in Nigerian literary writings. What Chinua Achebe did, apart from his quite masterly use of the English language, was to blaze the trail for those that followed: Wole Soyinka (Poet/Dramatist/Novelist, and Black Africa’s first Literature Nobel Laureate), Chukwuemeka Ike (prolific novelist), Christopher Okigbo (probably Africa’s finest poet of the last century), Chimamanda Adichie (foremost among the new crop of distinguished novelists, and who has been described as Chinua’s “literary daughter”), to name just four writers. No matter in which genre they have written, each one of the above took his or her inspiration, directly or indirectly, from Chinua Achebe. He showed us how we can tell OUR own story our own way and, not least, adapting and using our own idioms and expressions, to heighten the African essence and flavor of our stories.

4. USAfrica/Chido: Continuing on the same line, we all know that your versatile and creative energies in writing did not emerge overnight. Nnabuenyi, what motivated you to become a writer? And, I know that

my great mentor, the very distinguished Chinua Achebe, is still your close friend and school mate as far  back as the late 1940s at Government College Umuahia. Did he influence your interest to write novels?

Momah: I was motivated to become a writer by one of the most basic urges in our human condition: the desire to try to do what my two best friends had done so well, namely Chinua Achebe and Chukwuemeka Ike. The three of us were best friends, first in the mid-forties in the Government College, Umuahia, and later in the University College, Ibadan. I held back when they launched their literary careers because I knew I could never match their deep knowledge of the Igbo cultural underpinnings so essential in the telling of OUR stories. But as I advanced through the autumn of my life, I learnt to overcome that mental paralysis, and began to write my stories. Achebe and Ike, both told me, in their different ways: “If you have a story to tell, just go ahead and tell it!” That is what I have tried to do ever since.

5. USAfrica/Chido: How are the Nigerian and literature communities receiving and responding to your novels, both as scholarship and commercial product?

Momah: The answer to this question, not to put too fine a point on it, is that the reading public has not responded in any significant way to my novels. Their marketing and circulation have been extremely limited, for the rather obvious reason that my stories have been consistently rejected by the known and commercial publishers. In other words, I have had to be my own publisher, and have given away probably more complimentary copies than I have sold.

6. USAfrica/Chido: Assess the reading habits of the Nigerian and African communities.

Momah: The best way I know to comment on my fellow Nigerians in this matter is to state, quite simply, that Nigerians STUDY! What is called GENERAL READING, that is, reading that is not directed towards a course of STUDY, and therefore to examinations, is not a habit that is particularly well developed among us. I suspect – but do not know for sure – that the same applies to the rest of Black Africa.

7. USAfrica/Chido: Which of your novels has sold the most? And do you know why?
Momah: None!

8. Who are your favorite personalities in history, artistes and writers?

Momah: That is a tough one! But to the extent that I dare to answer it, I have to confess that I have a partiality for persons like me. Among musicians, my favorites are Michael Jackson, and Nat King Cole among the men, and the late lamented Whitney Houston (God rest her soul!) and Diana Ross among the women. Stage and Film performers: Sidney Poitiers, Denzel Washington and Morgan Freeman, to whom I would add Sir Lawrence Olivier. Chinua Achebe takes first place among writers.

9. USAfrica/Chido: Nnabuenyi Nnewi, you spoke, like I did, at the February 4, 2012  ceremonies in Dallas (Texas) celebrating the life and meaning of the late, charismatic leader of the Republic of Biafra, Ikemba Chukwuemeka Odumegwu Ojukwu. Both of you are prominent sons of Nnewi, and I believe, age-mates. Ojukwu is scheduled to be buried on March 2, 2012. What are your thoughts?

10. Assess him from the eyes of your training as a historian, and a Nigerian diplomat in Switzerland during the years of Biafra; and any personal perspective on him.

Momah: I would like to give one consolidated response to questions 9 and 10. (Momah forwarded as a response his tribute on the occasion of the celebration of his life of Ojukwu in Dallas, now published exclusively by USAfricaonline.com and the USAfrica-powered IgboEvents e-group. USAfrica published it here on February 29, 2012, titled “Nigeria’s refusal to respect Aburi accord forced Ojukwu to lead Biafra.” https://usafricaonline.com/2012/02/29/nigerias-refusal-to-respect-aburi-accord-forced-ojukwu-to-lead-biafra-by-chike-momah/

11. USAfrica/Chido: In my view and others, Nnabuenyi Chike Momah is made complete by the blessing of his marriage to an outstanding wife and exemplary daughter of the Igbo nation, Ethel Momah (nee Obi). You have been married since 1959; much longer before I was born (for the purpose of fair disclosure, the Momahs gave me the rare privilege of proposing their 50th anniversary toast in Dallas in 2010). Sir, please share with all of us the ingredients for a successful marriage. Tell us about the uniqueness of Mrs. Ethel Momah…
Momah: The ingredients for a successful marriage? My two-pronged answer: (a) Deep-seated affection for one’s spouse, the type that triumphs over all arguments and quarrels that are inevitable in most marriages; (b) Reverence for the very institution of matrimony, into which one should not enter lightly or playfully.
ETHEL is the second daughter of the great Chief Zacchaeus Chukwukaelo OBI, Okemili-Nnewi, Onunekwulu-Igbo, otherwise known as “Z.C.”, successor to the Owelle Dr. Nnamdi Azikiwe and Barrister Amanze Njoku as the President of the IGBO STATE UNION, precursor organization to the OHANEZE-NDIIGBO, the current apex Igbo organization in Nigeria. Ethel Momah (Arunne) – proof that the offspring of a snake is usually long – is the current President of the Nnewi Union (Dallas-Fort Worth), and was, from 2004 through 2008, the Vice-President of the NNEWI-U.S.A. (NUSA), the umbrella organization of Ndi-Nnewi in these United States.

12. USAfrica/Chido: Speak to the issue of better living, longevity and life. You still look terrific for a man born on October 20, 1930. What tips do you have to share…..
Momah: Longevity is a gift from God. But we can help ourselves and God by living an active life, both physically and mentally/intellectually.
13. One wish…
Momah: Long life and true happiness for every member of my family: my wife, my children and their children… I am 81 years old, and counting. And I do not want to appear greedy, but every additional year God gives me is a very welcome “icing on the cake”!
• Chido Nwangwu is the Founder & Publisher of Houston-based USAfrica multimedia networks, first African-owned, U.S-based newspaper published on the internet USAfricaonline.com;  and recipient of several journalism and public policy awards was recently profiled by the CNN International for his pioneering works on multimedia/news/public policy projects for Africans and Americans. He served as adviser on Africa business to Houston’s former Mayor Lee Brown.

I think Women writers (WRITA), and women in the Association of Nigerian Authors (ANA) and others are not doing badly in this regard. If...

My mentors are Flora Nwapa, my Uncle Chinua and all those others that came before me. One of my favorite books is one I...

USAfricaBooks: ‘Getting to the Top no matter what happened to you at the Bottom’ – versatile ways of Okechukwu Ofili

USAfrica & CLASSmagazine Profile Q&A: ‘Getting to the Top no matter what happened to you at the Bottom’ — the versatile ways of Okechukwu...