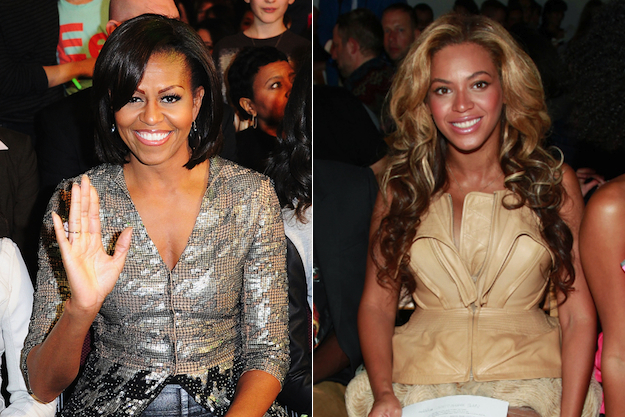 USAfrica: 30-year-old Beyoncé, superstar singer, actress, songwriter, producer, wife of rap mogul Jay Z and mother of baby daughter Blue Ivy, has posted a hand-written letter of commendation and high regards to thank U.S First Lady Michelle Obama. She is full of praise for all that Michelle is doing as the wife of the President, as a mother and role model to millions.

The letter downloaded by USAfricaonline.com and CLASSmagazine (and posted here) from Beyoncé’s site notes “Michelle is the ultimate example of a truly strong African American woman. She is a caring mother, she’s a loving wife, while at the same time, she is the First Lady!!!!”
Beyoncé who has sold millions of records pointed to Mrs. Obama’s strength despite the pressure of public spotlight: “No matter the pressure, and the stress of being under the microscope — she’s humble, loving, and sincere. She builds and nurtures her family, while also looking out for so many millions in so many ways.”

Beyoncé who was born and raised here in the greater Houston, Texas area concluded by thanking Michelle for contributing to making the world a better place: “I am proud to have my daughter grow up in a world where she has people like you, to look up to.”

She was born Beyoncé Giselle Knowles on September 4, 1981, and achieved stardom in the late 1990s as the lead singer of the all-girls group Destiny’s Child.

USAfrica notes that Beyoncé has carried on with dignity reflecting the image of a responsible, classy woman without any drama, scandalous or demeaning stories. She is a role model herself for millions around the world. By Chido Nwangwu, recently profiled by the CNN International for his pioneering works on multimedia in the interests of Africans and Americans, is the Founder of USAfrica,  CLASSmagazine  and USAfricaonline.com , assessed by the CNN and The New York Times as the largest (and arguably the most influential) African-owned, U.S-based multimedia networks.

Nelson Mandela managed one more victory in death: subjecting a Who's Who of the world's dictators to the indignity of sitting through a memorial...

There will be both public and private farewells for former South African President Nelson Mandela, who died Thursday at the age of 95.

Onyango Okech Obama -- an uncle of President Barack Obama who has been in the United States illegally for decades -- has gotten a...

President Obama, according to a White House statement, called President Uhuru Kenyatta of Kenya to express condolences to the government and people of Kenya for...

President Barack Obama announced Thursday that the United States has canceled joint military training exercises with the Egyptian military and alluded to the fact...

President Barack Obama concluded his trip to Africa Tuesday after making a final pitch for partnership at a Tanzanian power plant.