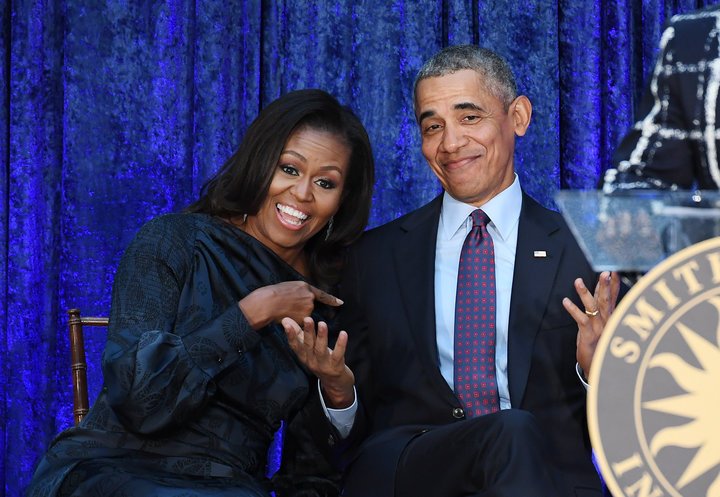 Former First Lady Michelle Obama and former President Barack Obama are seen after their portraits were unveiled at the Smithsonian National Portrait Gallery on Monday February 12, 2018 in Washington, DC. The former President's portrait was painted by Kehinde Wiley while the former First Lady's portrait was painted by Amy Sherald. (Photo by Matt McClain/The Washington Post via Getty Images)

Barack Obama’s election and leadership as a two-term President of the United States (January 20, 2009 to January 20, 2017) have since become significant chapters in the continuing quests for a “more perfect union.”

Former President Obama was born on August 4, 1961, in Honolulu, Hawaii, to a Kenyan father and a Caucasian mother.

For the avoidance of any doubts and for the record, he’s the 44th President of the United States and  therefore the first African-American to be in that historic position.

Obama’s presidency was the manifestation of the promise of the empowerment achievable through the gradualism of the power of the ballot even for the African-Americans who constitute part of the minorities in the United States of America.

Realistically, by the year 2035, if the population trends and growth profile continue, the U.S is not likely to have a supervening majority who are Caucasian, White and Anglo Saxon.

Significantly, the demographics and what constitutes and who constitutes the majority population are projected and expected to benefit the Hispanic/Latino population.

Let’s get back to Barack Obama turning 60 years in the age of the pandemic as dangerously seen with the coronavirus and the Delta variant.

First and foremost, in the interest of Public Safety and the wellness of his friends and family the former president had to substantially revise the A-List of the powerful and influential persons to the most necessary of only family and close friends for an outdoor birthday party on Martha’s Vineyard, near Boston, tomorrow Saturday, August 7, 2021.

Essentially this was in reaction to the complaints by many progressives in the Democratic party, epidemiologists and health officials who argued that such a big event will throw the spread of the coronavirus and its new variants towards an upward spiral.

It is important that primary consideration for public health safety come first regardless of who’s throwing the party! I think this has been amplified in the statement from Hannah Hankins, a spokeswoman for the Obamas, that “Due to the new spread of the Delta variant over the past week, the President and Mrs. Obama have decided to significantly scale back the event to include only family and close friends. He’s appreciative of others sending their birthday wishes from afar and looks forward to seeing people soon.”

At least, one of those “people” that he’s not going to see at the party at Martha’s Vineyard will be his former Vice President, now President of the United States Joe Biden.

I think Barack should be commended as well as former First Lady, the very purposeful Michelle Obama, as good examples of sensitive, sensible and responsible public figures by their latest decision to massively reduce the scale of the birthday bash. Especially, these days when most of the Republican party leadership in the U.S House of Representatives and some of its Governors pretend that there is nothing like coronavirus!

Have you not seen the Republican Governor of the state of Florida (former President Donald Trump’s current state of residence) dismiss and deny the value of wearing masks?

Have you not read the same divisive and racially polarizing Governor of Florida Ron DeSantis attack public safety procedures as an assault on our individualism?

The remarkable an interesting part is that his leader, former President Trump took his vaccines against coronavirus! Yes, he did.

Yet, some of the “guy man’s” followers in Nigeria — to this day — still argue foolishly and recklessly that coronavirus does not affect them in Nigeria!!

What manner of self-debasement and ultimately self immolation?

There are millions of others in the United States who still make the same foolish comments.

It is terrible nuisance and toxic disinformation and misinformation to watch these folks and their leaders (from any continent) spit in the face of scientific facts about coronavirus and its latest variants.

I recall, therefore, the timeless words of the prophet, Martin Luther King Jr. who said “There is nothing more dangerous than sincere ignorance and conscientious stupidity.”  @Chido247                                                                         *Dr. Chido Nwangwu, the author of the forthcoming 2021 book, MLK, Mandela & Achebe: Power, Leadership and Identity, serves as Founder & Publisher of the first African-owned, U.S-based newspaper on the internet, USAfricaonline.com, and established USAfrica in 1992 in Houston. He is recipient  of several public policy and journalism excellence honors, civic engagement  and community empowerment awards and has appeared as an analyst on CNN and SKYnews. He served as an adviser on Africa business to Houston’s former Mayor Lee Brown.  @Chido247

South Africa has been the continent’s hardest hit country.  By Phill Magakoe in Johannesburg (AFP) More than 200,000 people have died from Covid-19 in...

Congolese President Felix Tshisekedi, who criticized the AstraZeneca vaccine for Covid-19 as inoculations began, has received a first dose and urged the nation to...