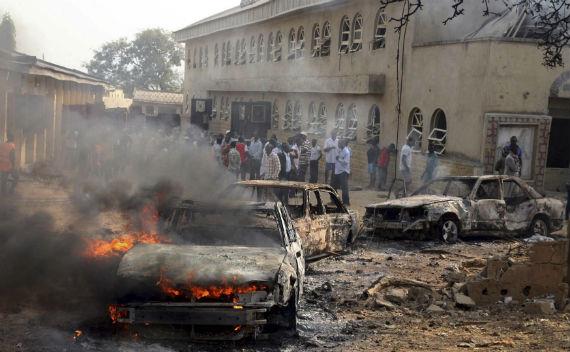 Nigeria’s opposition party, the Peoples Democratic Party (PDP) has criticized the country’s President, retired Gen. Muhammadu Buhari, for the multiple, brazen acts of terror attacks on the security and armed forces installations across the country. The PDP “laments that the insecurity situation has so deteriorated under President Buhari and the APC’s incompetent and compromising watch that suspected bandits now have the temerity to attack military formations, including the Nigerian Defence Academy (NDA), Kaduna, where they killed two officers and abducted another senior officer. Bandits and terrorists are now freely ravaging our communities in Kano, Kaduna, Kogi, Benue, Zamfara, Adamawa, Taraba, Borno, Yobe, Imo and other states of the federation, including Mr. President’s home state, Katsina, where the governor, Aminu Bello Masari, has now asked victims of terror attacks to defend themselves.”

“It is distressing that having lost hope in the capacity and commitment of the President Buhari-led APC administration to protect their citizens, state governments are now sending vehicles to the University of Jos, Plateau state, to evacuate their citizens. This shows their complete loss of confidence in the APC administration and the empty promises by the Buhari Presidency.

In a statement issued on Tuesday, Kola Ologbondiyan, PDP spokesperson, said Nigeria’s insecurity has worsened, adding that “bandits now have the temerity to attack military formations…. the decision by some state governments to evacuate their citizens from violence and terror-ridden states, including Plateau state, further confirms that Nigerians have lost faith in the capacity of President Muhammadu Buhari and the All Progressives Congress (APC) administration to secure the nation.”

“It is even more disheartening that while our nation is under turmoil and while hundreds of helpless Nigerians, including innocent students, are languishing in kidnappers’ den, President Buhari and APC leaders are more interested in their lavish funfair with state-owned resources and facilities.

“Our party notes that violence and acts of terrorism had escalated across the country due to the incompetence and compromises of the Buhari administration as well as its refusal to heed wise counsel from well-meaning Nigerians, including the PDP on how to secure and stabilize the nation.”

Nigerians should, the PDP said,  “hold the APC directly responsible for the escalated acts of terrorism in our country as history will continue to mark this administration for its mass failure in governance and for plunging our nation into the worst form of hardship and suffering ever”.