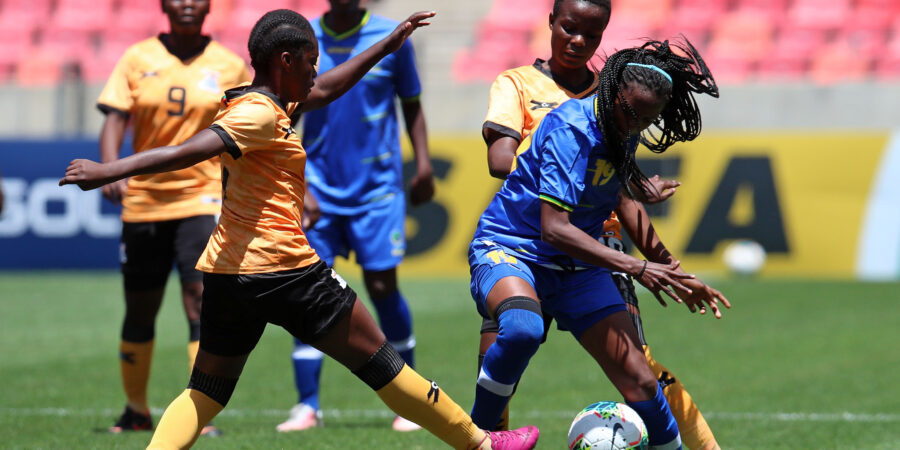 Irene Elias Kisisa of Tanzania challenged by Shelly Masumo of Zambia during the 2020 COSAFA U17 Womens Cup Final match between Zambia and Tanzania at the Nelson Mandela Bay Stadium, Port Elizabeth on the 14 November 2020 ©Muzi Ntombela/BackpagePix

Why Madam President got a red card for calling women footballers ”flat chests”. By Chido Nwangwu

Almost in any major city in the United States, you will see African heritage girls who play soccer, also popularly known as football — around the world.

I do believe that soccer is the most popular sport in the world! By the way I love soccer and I play and I watch the game. Anyway, you already know that this soccer/football is different from the ‘American football.’

As a matter of fact, some of the biggest stars who share in our African heritage have emerged through their discipline and dedication on the competitive arena of sports. That is, men and women!  They play the game for the love of the sport. Just the same way so many of our young men and women love basketball.

They deserve our support. They do not deserve sexist stereotypes and derogations which do not help anyone. Especially when such negative castigations of young and aspiring women are made by older women — who should be fountains of inspiration for this impressionable demographic. More so, it is an appalling minimization of some of our worthy    ambassadors of sports excellence from Boston to Dakar, from Aba to Atlanta, from Dar es Salaam to Djibouti when such harsh comments are made by a country’s President who also is a woman.

You will therefore understand my disappointment when I read what Tanzania’s (Madam) President Samia Suluhu Hassan said at a ceremony on Sunday August 22, 2021 to celebrate the victory of a national men’s team in a regional football championship  about women footballers having “flat chests”.

For proper context, let me quote her statement at the event:  “For those who have flat chests, you might think they are men and not women…. And if you look at their faces you might wonder… because if you want to marry, you want someone who is attractive, a lady who has the qualities that you want.”

She continued that for the women soccer players “those qualities have disappeared.”

Just when you thought that she had delivered enough body blows, she dropped another bomb:

“The life of marriage is like a dream to them. Because even if one of you here takes them home as your wife, your mother will ask if they are a woman or a fellow man.”

Madam President Hassan made a couple of observations and closed with a question: “Today, they are making us proud as a nation when they bring trophies to the country but if you look at their lives in the future, when the legs are tired from playing, when they don’t have the health to play, what life will they be living?”

Hassan and Ethiopia’s President Sahle-Work Zewde are the only female heads of State in the African continent.

The great pan-Africanist and progressive Julius Nyerere was the founding President of Tanzania, in 1964, formed when Zanzibar and Tanganyika merged.  It is a very progressive country therefore her comments remain very jarring to many people.

At a sociological level, it has been said that women are the most harsh critics of other women. Consequently, I agree with the tweet made by Catherine Ruge, the head of the women’s wing of the opposition Chadema party and former member of the Parliament of Tanzania, that “The comment by president @SuluhuSamia on women footballers is a humiliation to all women…. All women deserve respect.”  Or, is that too much to ask, Madam President?

—  *Dr. Chido Nwangwu, the author of the forthcoming 2021 book, MLK, Mandela & Achebe: Power, Leadership and Identity, serves as Founder & Publisher of the first African-owned, U.S-based newspaper on the internet, USAfricaonline.com, and established USAfrica in 1992 in Houston. He is recipient  of several public policy and journalism excellence honors, civic engagement  and community empowerment awards and has appeared as an analyst on CNN and SKYnews. He served as an adviser on Africa business to Houston’s former Mayor Lee Brown.  @Chido247